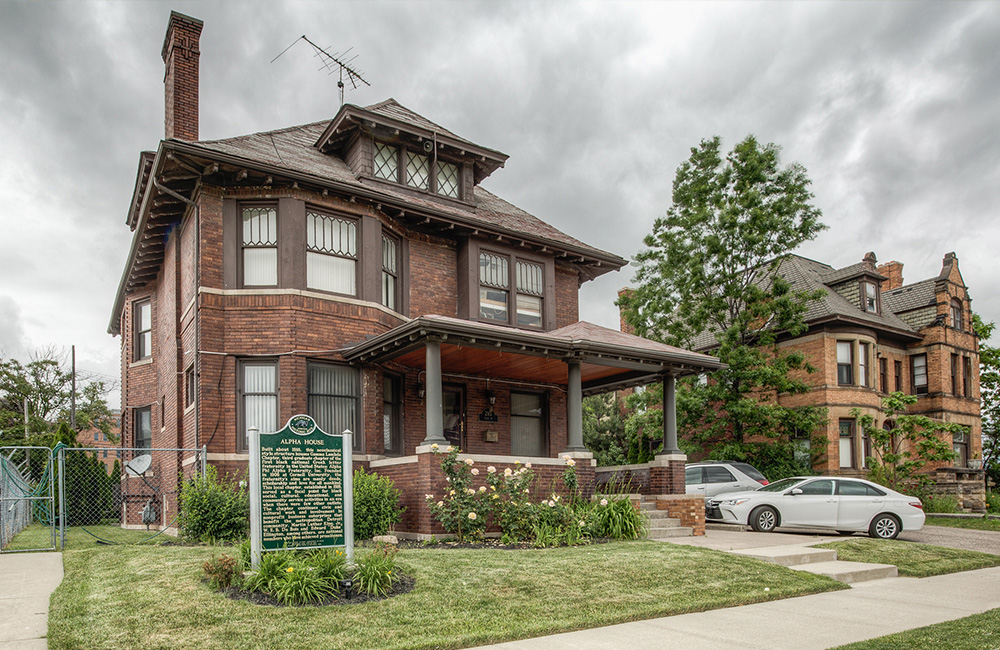 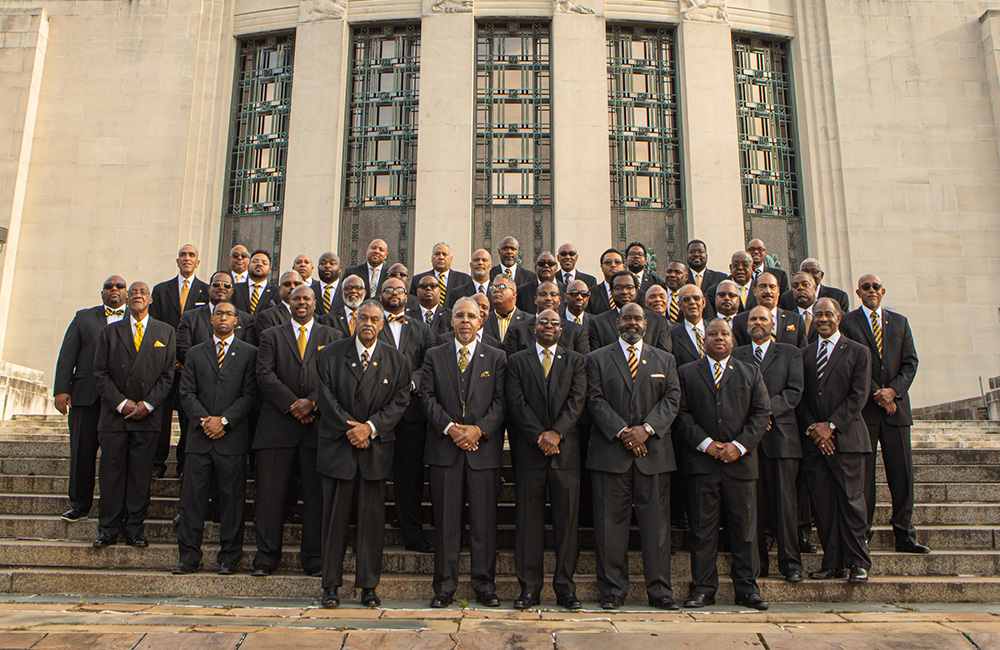 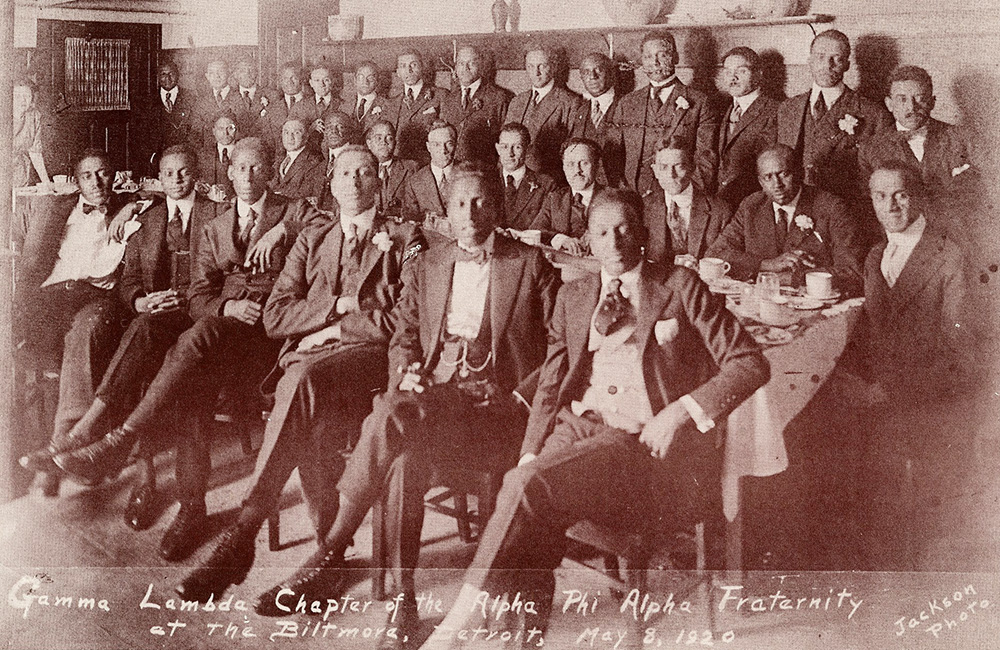 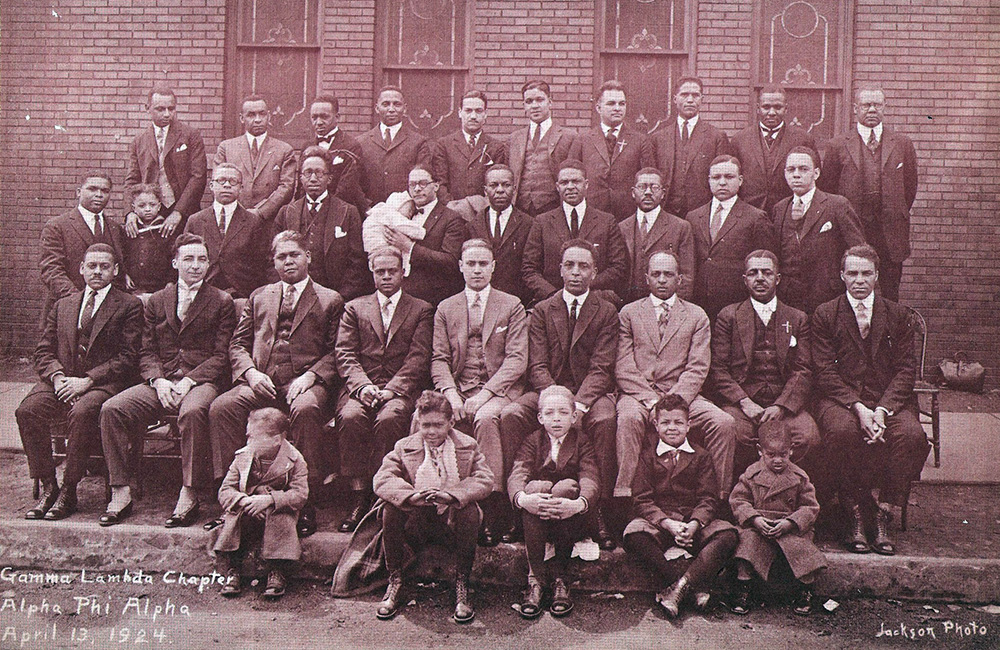 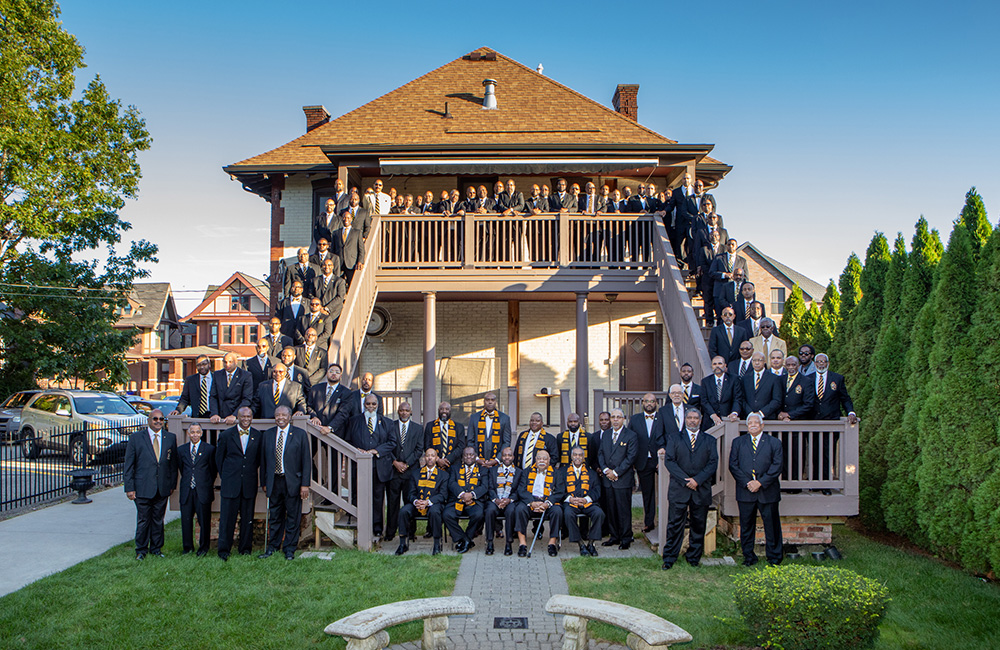 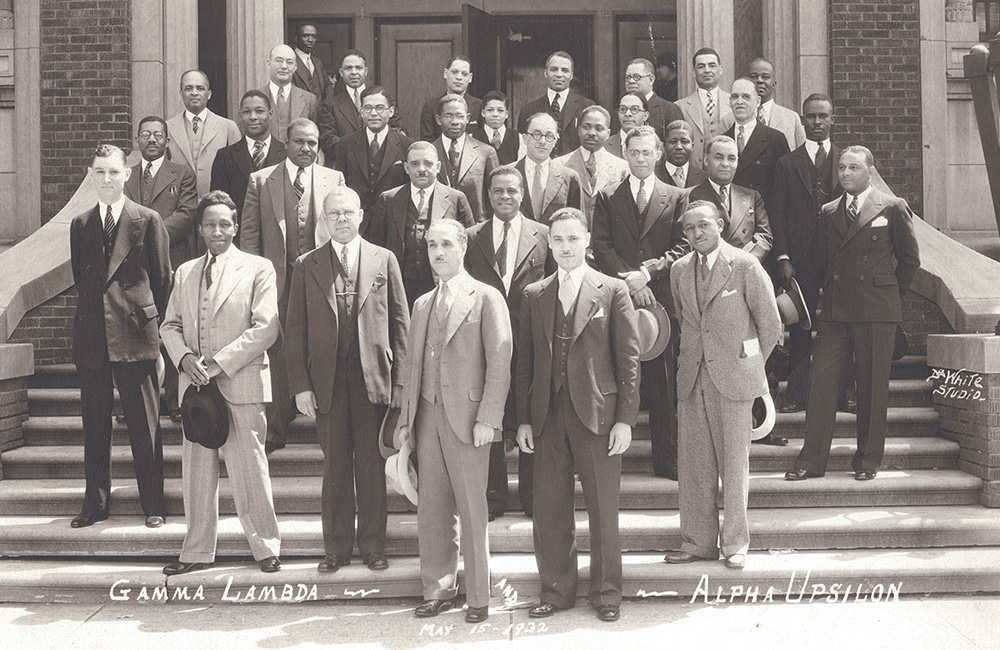 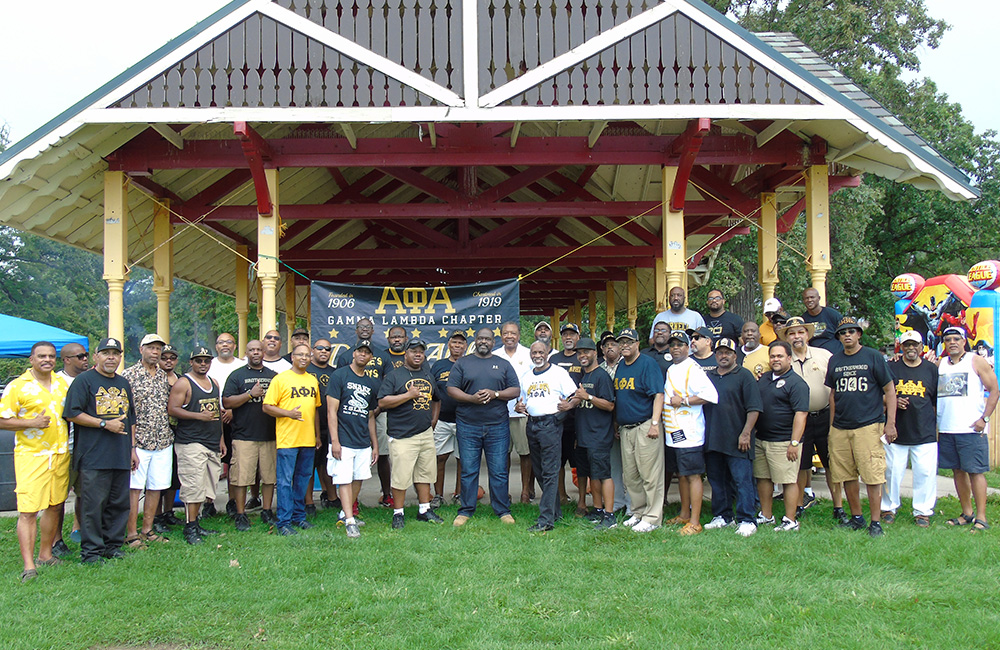 A Brief History of the Gamma Lambda Chapter

The Gamma Lambda Chapter of Alpha Phi Alpha Fraternity, Inc. was chartered on March 22, 1919 in Detroit, Michigan by thirteen men who were influential in the Detroit community. These men, along with some of our early initiates, led many of the organizations that supported the uplift of African Americans in the city. Gamma Lambda is the third oldest alumni chapter in the fraternity and one of the largest, boasting a membership of over 250 brothers.

The Detroit Alphas were recently recognized as the 2021 Outstanding Alumni Chapter of the Year at the 96th General Convention.

The History of Alumni Chapters

On April 11, 1911, Brother Richard Hill, Jr., with the assistance of Jewel Eugene Kinckle Jones, established the first graduate chapter of Alpha Phi Alpha. The decision to establish a graduate chapter was met by opposition from the National Body. The opinion of the Brothers at that time was that the Fraternity was for undergraduates only.

On November 19, 1912, the official sanction for the establishment of the Alpha Alumni Chapter in New York City was granted by General President Charles Garvin. The alumni, gathered in various centers, were urged by President Garvin, “to form alumni chapters wherever there are sufficient members to meet the constitutional requirements.” Unfortunately, the alumni members were taking very little active interest in the fraternity at this period. The motive behind this proposal was to bind them closer to the General Organization and make them feel that they were still members of the fraternity after graduation from college.

The Detroit community at that time was populated with a number of successful Alpha brothers, many of whom had matriculated through the University of Michigan, earning undergraduate and graduate degrees in medicine and law. On account of the close proximity of Detroit and Epsilon Chapter in Ann Arbor, many brothers set up their practices and settled down with families in our fair city. As a result, the city could boast of an unofficial chapter prior to its installation. 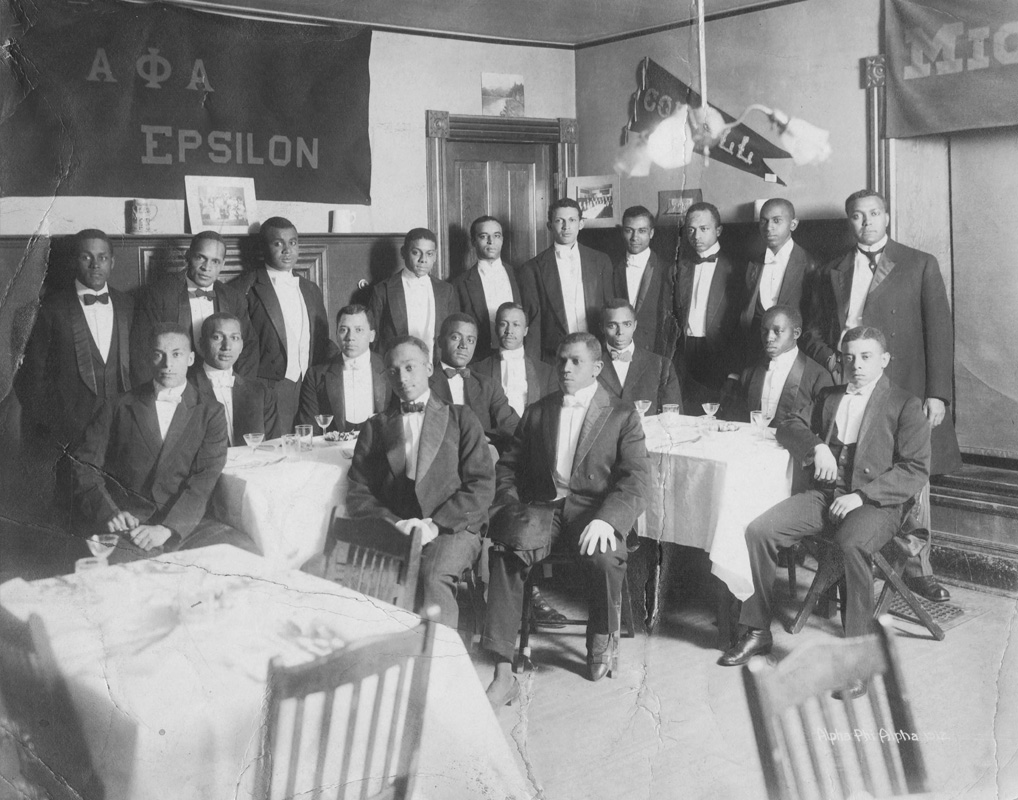 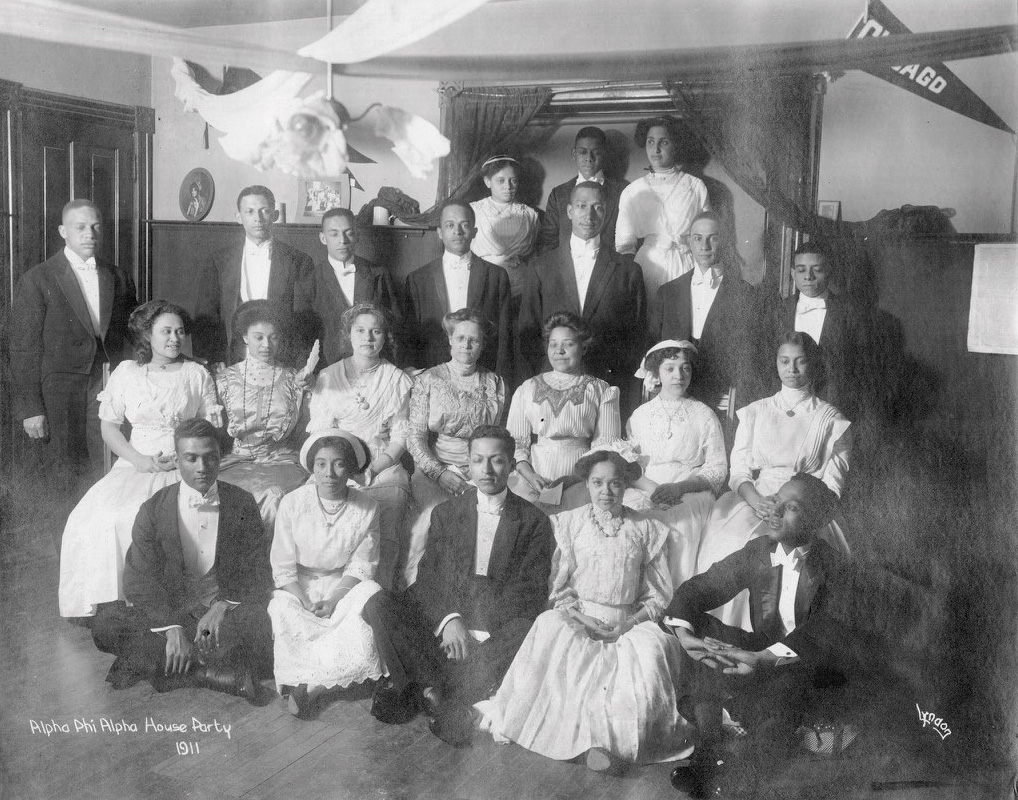 An organization meeting was held on February 1, 1919 at the office Dr. Moses E. Morton and Dr. James M. Gregory at 1721 St. Antoine Street. At this meeting, the following brothers were present: John H. Alexander, Ulysses S. Cary, Charles H. Campbell, Elmer J. Cheeks, James L. Henderson, Cornelius L. Henderson, Stephen D. Sparks, and Moses E. Morton. Temporary officers were selected at this meeting: Brother James L. Henderson, president; Elmer J. Cheeks, secretary; Moses E. Morton, assistant secretary; and Ulysses S. Cary, treasurer. Shortly afterward, an application for a charter for a Detroit Chapter was sent to the General Organization. On February 17, 1919, Brother Elmer J. Cheeks was authorized to establish Chi Chapter in Detroit, Michigan. On March 22, 1919 chapter was officially installed. Soon after, it was discovered that the chapter had not received the proper designation, in view of its graduate character, and the name was changed to Gamma Lambda. The charter bears the names of the following Charter Members:

In 1925, Gamma Lambda hosted its first General Convention in Detroit. Total chapters participating were 36. Original documents show that Gamma Lambda was intensely working on the “Go to High School – Go to College” program “for the betterment of colored folk” in the community every year since its 1919 founding year. During 1926, Gamma Lambda initiated the program in conjunction with the Detroit Urban League.

During the 1930’s, the Gamma Lambda Chapter continued to grow. Some of the brothers, aroused by the inadequacy of the meeting places suggested that Alpha be housed in suitable quarters. The response was terrific and as a result on May 15, 1939, the house at 293 Eliot was purchased. Our Alpha House in Detroit is the oldest fraternity house in our dear fraternity.

Throughout the 1940’s and the 1950’s, Detroit was extremely prosperous, of course, because of the booming automobile industry. Black businesses flourished in the “Black Bottom” and “Paradise Valley” districts, famous for the large number of Black owned and operated businesses during those times. The Gotham and the Biltmore Hotels were very popular Detroit spots. The Alphas of Detroit were known for having great social affairs called “open houses”, which the public would regularly attend. Dinah Washington, Ella Fitzgerald, Brother Duke Ellington and other Jazz greats made Detroit a principle hangout during these wondrous times.

To illustrate the prosperity and significance of the era during the 1953 Annual Convention, there were 222 financial Brothers at Gamma Lambda. The Sheraton Cadillac Hotel held the banquet – a first for “Negroes”. Chrysler Corp. provided free transportation for convention officials – another first for a predominant Negro organization. The hotel rates of the time were about $8.20 for a double and $4.40 for a single room with toilet! The financial secretary was (the only) paid officer. According to chapter records, Gamma Lambda held $11,020 in U.S. Savings Bonds and the property value of 293 Eliot St. and its furniture was valued at $9,250!

Good times, apparently, do come to an end. 293 Eliot St. saw difficult times in Detroit during the struggles of the civil rights movement of the 1960’s. In recognition of our service efforts, Gamma Lambda received the Outstanding Graduate Chapter Award at the Los Angeles Convention in 1967. Gamma Lambda sponsored Brother Duke Ellington’s concert at Ford Auditorium. In September of the same year, civil unrest hit its peak in Detroit with the infamous 1967 riots. The following year, the 1968 National Convention came to our city, hosted at the Detroit Statler – Hilton Hotel.

Bro. Ramon Scruggs delivered the keynote address, challenging his Fraternity to “enter the Black struggle and make certain there are no Black spectators in this current struggle to make Black Americans free.” Millions of dollars in Black owned property and businesses were destroyed due to the civil unrest at the time against excessive use of force of law enforcement personnel, unfair housing practices and economic inequality.

Alpha Phi Alpha issued a statement reading: “Black Power is a proper and necessary objective in acquiring economic power and influence… For Alpha Phi Alpha, Black Power does not mean revolution by violence, or destruction, rather it means the exercise of legitimate means to obtain control over the destiny of the Black community by Black people – that must be our concern”. The Fraternity then called for congressional action to alleviate suffering of thirty five million Black people after declaring large scale poverty during the 1960’s “unjust and unnecessary”.

In August 1977, the Alpha House was recognized for its historic significance to the State of Michigan and was add to the Michigan Historic Registry.

In 1976, Gamma Lambda awarded citation plaques to Brother Thurgood Marshall, Congressman Adam Clayton Powell, General President Belford V. Lawson and others, recognizing their efforts in the cause of civil liberties while in Detroit.

Founded on April 27, 1982, the Gamma Lambda Education Foundation was founded to make a significant difference to students who needed the extra financial assistance while striving for academic excellence. The following Alpha visionaries generously donated over $60,000 collectively toward its creation.

In 1987, the Inter Collegiate Council was created to promote camaraderie and Brotherhood between the college and alumni Brothers in metropolitan Detroit.

In the 1990’s, Gamma Lambda experienced a significant increase in membership and continue to be one of the largest chapters in Alpha. “34 – The Sacred sum of S.E.V.E.N.” became the chapter’s largest line in December of 1995. Gamma Lambda hosted the 85th General Convention in August 2003, which had the largest attendance of registered Brothers in Alpha history.

In recent history, the Chapter’s Project Alpha in conjunction with the Alpha Esquires has worked with over 300 youth in the Detroit area including current commitments to local young men in the 9th grade. Platforms of male responsibility include sexual abstinence, personal hygiene and excellence in academic performance. The Education Foundation has awarded over $80,000 to worthy scholarship recipients.

The Brothers of Gamma Lambda continue to co-sponsor the area’s Meals on Wheels program, delivering hundreds of meals to Detroit citizens during the holidays. After a devastating fire at a local church, the Alpha House became the distribution center for the event.

Gamma Lambda’s current working relations with other local Greek organizations as well as the local undergraduate Alpha chapters in the Detroit area have improved exponentially in the chapter’s recent history. Chapter Brother Alex Johnson currently serves as president of the local Detroit chapter of the Pan Hellenic Council.

There have been numerous renovations to the Historic Alpha House, championed by Bro. Past President William J. Lyons, IV during the administration of Past President George Wayne Watkins. Updates include a new basement, “the Gold Room”, commercial kitchen and bar, renovated landscaping, new windows and a dramatic two-story stair case leading to a new rear porch and “Jewel Park.” Most recently, the technology in the house has been modernized, the roof was replaced, and the electrical work throughout the house was updated. The house is truly a “jewel“ in Alphadom.

In May 2007, the Gamma Lambda Community Development Corporation was established. This organization is a private, 501(c)3 nonprofit organization established under the guidance of Past Presidents Bro. Alonzo F. Terry, Jr., William J. Lyons, IV and Dr. Richard T. James, Jr. This non profit was tasked with creating programs that educate and enhance the lives of urban, at-risk males. Corporation programs assist urban males in their educational and social endeavors. It is through these programs that Gamma Lambda Community Development Corporation aims to strengthen at-risk families and prevent the generational cycle of poverty, teen pregnancy and educational stagnation. The vision of Gamma Lambda Community Development Corporation is to develop and sustain efforts and services that encourage strong, healthy and self-sustaining families and supportive communities.

The year 2019 marked an important milestone for the Gamma Lambda Chapter. The chapter celebrated one hundred years of service and advocacy to the Detroit Community. The Centennial Celebration Gala was held on October 19, 2019 at the Detroit Marriott in the Renaissance Center. More than eight hundred brothers and guests were in attendance. The formal conversion of the Alpha House attic into the Gamma Lambda Chapter Museum was unveiled during the centennial weekend. The attic was repainted, and display cases were added to showcase awards, artifacts, documents, photos, and memorabilia acquired over the first one hundred years of the chapter.

We are proud of our organization’s history and truly excited about the future, the true Spirit of Alpha is alive and well at Gamma Lambda Chapter.